Lunch Box Buffet: Chinese Food For $4.50 At The Chinatown 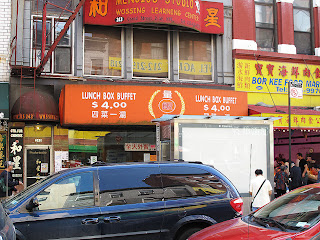 They sell cheap food here: sit-in with 5 item selections is $4.50 and carry-out is $4.00. This is the cheapest place by $0.25 in the Chinatown that I know of. It is located on the Grand Street, right after you cross the Bowery, right next to the smelly market place. 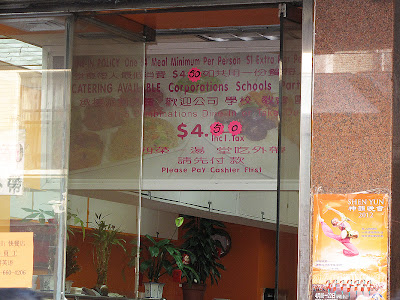 They up the prices every-so-often, so I don't know what it costs now or if the price hike took place: since I went here in March-April period. 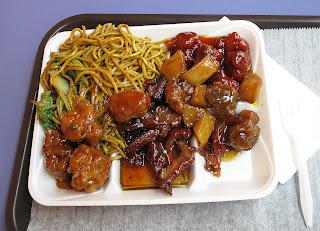 I got all of this stuff. It wasn't anything great but it was warm and tasty and I did not complained.
Posted by Dick Anus at 9:19 PM No comments: 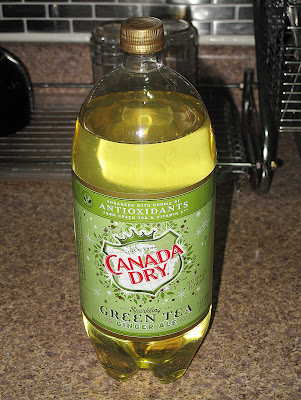 Couple of weeks ago [sometime in the summer, I started writing this entry in the summer and just got back to  it, but they still sell this stuff; I just seen it yesterday at Stop & Shop] I stopped by at the Walgreens and noticed that they have this new Canada Dry ginger ale up for sale. I never seen it before and idea of tea-flavored soda intrigued me, and the price was $1.00 on sale, so I knew that I had to give it a try. The label was pretty interesting as well with the green tea theme of leaves and the header of "antioxidants" at the front. 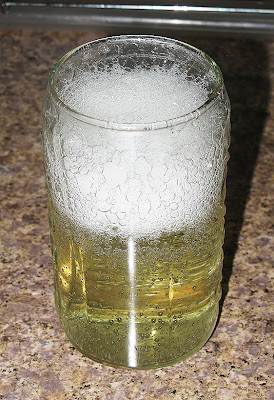 The drink itself is overally pleasant, well carbonated and not as sharp like the original ginger ale due to the green tea. The green tea part tasted very much like Lipton green tea from a gallon jug, so it was pretty good. To tell the truth, I am not a big fan of ginger ale but I do not hate it; I just drink it once in a while [like a bottle or 2 every 3 months or so]. Carbonation was pretty good as you can see on the photo and it pretty much charged-up the green tea flavor into a pleasant sipperious beverage that many people would be curious to try out. I think that they will discontinue this flavor of ginger ale in the nearby future: either before the upcoming holidays to give way to cranberry-flavored Canada Dry or right after new year timeperiod in January of 2013, so grab a bottle if you can and let me know your opinion. I rate this green tea ginger ale at 4.1/5.0 with a value rating of 4.4/5.0 on $1.00 sale.
Posted by Dick Anus at 8:52 PM 1 comment: 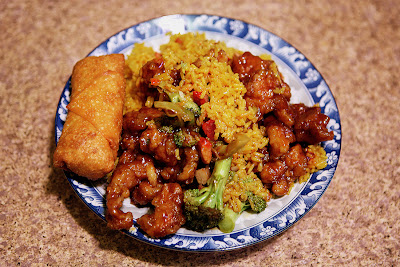 I really like Chinese food: it is cheap, tasty and pretty much readily available in NYC. One of the menu sections on the Chinese joint's menu is the "Combo Specials". With these items you save anywhere from$3.00 to $4.00 than if you would purchase the combined food items separately. Yesterday for lunch I was doing some shopping errands and was passing by the local Chinese [hole-in-the-wall joint] and decided to get something for under $10.00, so I placed an order for the General Tso's Chicken Combo Special for $7.25 ($7.90 with tax); this combo includes an Egg Roll, half of a plate-container with Pork Fried Rice, and other half of plate-container of General Tso's Chicken. If you order the items separately, then the price without tax comes to $10.25 without tax, given than the Pork Fried Rice and General Tso's Chicken are small size. Sure, the portions of rice and chicken will be a bit smaller in the combo than if purchases separately, but the savings of $3.00 are pretty something: around 30%. After I placed my order, I went to several others stores in the vicinity, and when I came back to Chinese joint, they were finishing up my order and I was able to observe the finishing touches on General Tso's Chicken: the wok guy took the chicken pieces from the deep fryer basket and tossed them into the wok for 8 seconds to bake-in the General's sauce glaze. This is why it is not possible to cook the food at home so well like they do at the Chinese joints: the household range just can't produce the high-temperature heat like they do at the Chinese joints with the jet burners.
Posted by Dick Anus at 3:12 PM 1 comment: 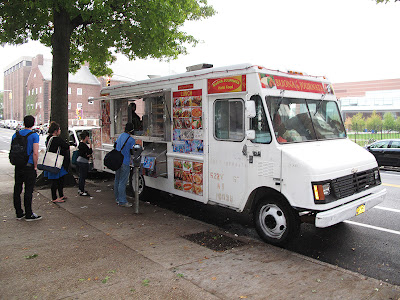 Theres this food truck by the name of Buona Journata on the sidewalk right next to the building where I go to in Brooklyn College, and this truck seems to be packed here all the time so I just call it Brooklyn College Food Truck. They pretty much sell all your regular halal food cart stuff along with breakfast items, french fries, hot dogs, burgers and more. Since this food truck is a staple at Brooklyn College, I decided that I must try it out and see if it is worth it. 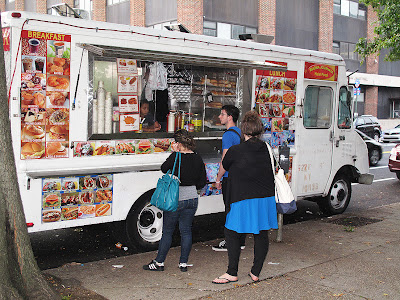 Most of the time there is a good number of people around this truck, so it must be popular with the locals (students). Note that the menu item photos are missing the prices, except for couple of items on the window to the left. Absence of visible prices is a violation of a NYC administrative code/law. 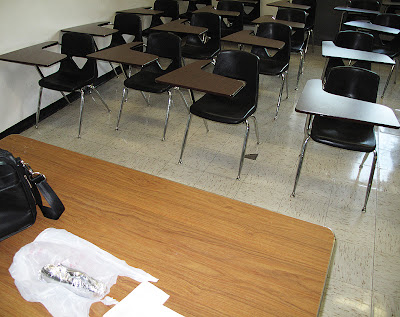 Before one of my courses, I went up to the truck and ordered a lamb gyro since it is a food item that I can look forward to and am familiar with very well. The price for it was $4.00, which is pretty much the standard price that the gyros are sold for in the area of Flatbush Avenue and around the Nostrand Avenue. Instead of going to the lunchroom, I found this empty classroom with open door on the floor that my course was held on, since I used flash on my camera, the use of the empty classroom was better suited than the lunchroom. 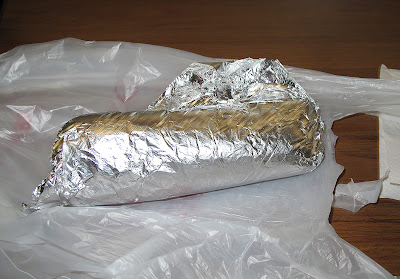 The gyro came in a standard double foil wrap. 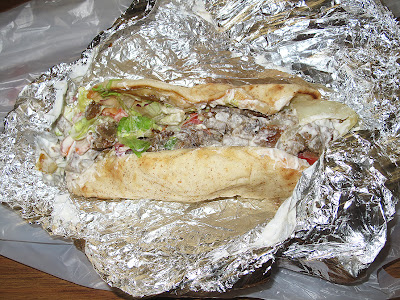 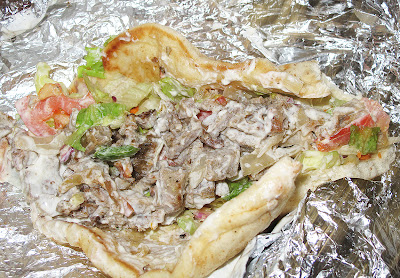 The meat turned out to be kind of bland and not well-seasoned as the most gyro carts have in New York City. The quantity of the meat was alright; not little and not a lot, but the taste of it was much better than I had hoped for. The vegetables were also an issue because they seemed like they came from a Foxy or Dole bagged salad mix that you can find at you local supermarket rather then individually cut produces. Leafy greens and carrot strips suggested to me the bagged salad mix, and I am not a big fan of carrots and it is the first time that I have seen carrots in a NYC street gyro. At first I really like that they included tomatoes in the gyro, but they were bland and tasteless, so other than releasing the bland juices to help with the bland meat, they were pretty much useless. The gyro bread was okay as well as the white sauce; it was pretty much your standard gyro bread and white sauce that every other halal carts use. Overall I did enjoyed this gyro and before I bought it I had higher hopes for it. Bland meat and salad mix of vegetables were the biggest issues that disappointed me, but I did satisfy my hunger for the next 2 hours of class time, and the truck is conveniently parked in the center area of college. I rate this lamb gyro from Brooklyn College's Buona Journata food truck at 3.1/5.0 with a value rating of 3.5/5.0. I do not recommend purchasing lamb gyro here because of mediocre taste and inferior ingredients, compared to the other halal carts in the area [there are at least 4 of them]. 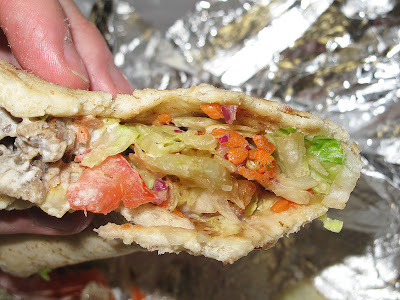 Close-up of inside the gyro. 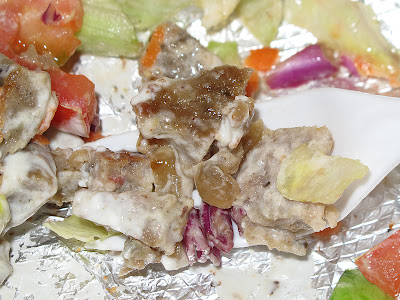 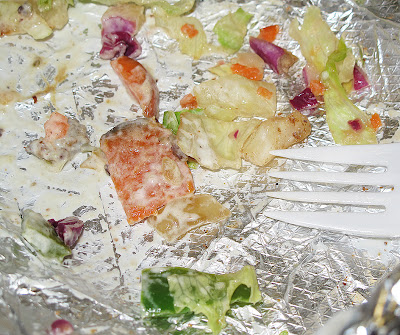 Close-up of veggies.
Posted by Dick Anus at 8:03 PM No comments:

My computer recently broke down as well as digital camera, and I have been pretty busy with school and personal projects for the past couple of weeks and this is why there has not been any new posts. But I did receive replacement USB charger from the South Beach smoke, V2 Cigs adapters, Humble Twin razor from Dollar Shave Club and several shaving creams. I bought a new laptop so I gotta figure how to get the files from the broken laptop into the new one.
Posted by Dick Anus at 8:31 PM 1 comment: