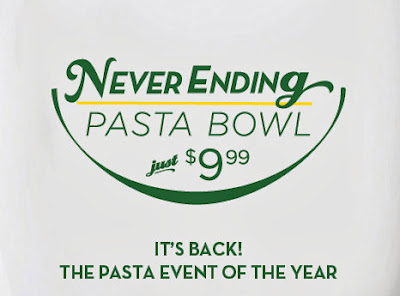 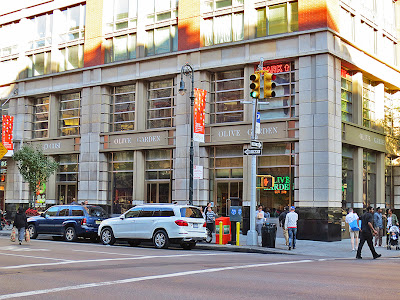 So on Friday I go there and the place is pretty much half empty: I get in and tell that I want a seat and get seated right away, and they give me 2 menus: one of them is of their featured [but not sale/promo] items, with nice-looking photo shots and the second menu is their standard text-only menu of their regular items and wine. So I sit there for around 3-4 minutes and then the server named Tyler B shows up, introduces himself and asks if I made my mind about what I want to order. I ask him if the Endless Pasta Bowl special is still available, to which he replies that he is sorry and that the Endless Pasta Bowl special has end today [Friday] and if there is anything else that he can get me. At this point I give him the benefit of the doubt since I did not know the end date of the promo, but I did checked the Olive Garden's website for this location earlier that morning and there was the Endless Pasta Bowl advertising still going on. So I quickly look at the featured items menu and look for a cheap dish that won't offend my tastes [I know that they have a bunch of cheeses in their dishes that I don't like], pick the Grilled Chicken Flatbread and Blackberry Blood Orange Tea for a drink. 3-4 minutes later the drink was served, and 3-4 minutes more and Grilled Chicken Flatbread was delivered to my table. 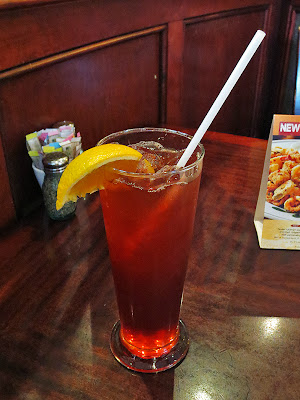 Blackberry Blood Orange Tea - "The fresh and fruity flavors of blackberry and blood orange mixed with iced tea" - cost me $3.79 and it was a pretty good beverage. It tastes like mix of tea and a berry punch, which I love and could see myself drinking this stuff back home. The only thing that I did not liked is that the glass had a lot of ice in it, and I don't like the idea of paying the premium for plain ice. 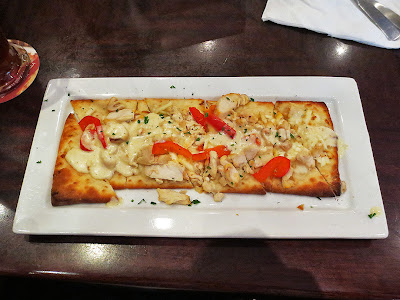 Grilled Chicken Flatbread - "Chicken, mozzarella, roasted red peppers and basil with Alfredo and garlic spread" - was priced at $10.79 and essentially it is a small thin crust pizza less the pizza sauce. It was pleasantly tasty, like a premium frozen pizza but for me it was just simply too little of a food, I presume that it was around 7 ounces or slightly less. I finished it in a couple of minutes and asked for a check. 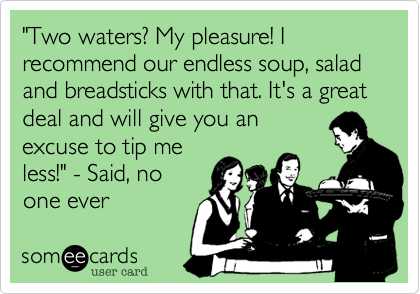 Subtotal same out to $14.58, plus the sales tax of $1.29, with the suggested 18% gratuity of $2.62 to the total of $18.49, to which I paid $19.00 and took the receipt with me. When I got home, I began googling for the end date of the Endless Pasta Bowl and found out that the last day is September 29. I found the circular which confirmed this date and also called the Oliver Garden location that I visited, and the phone lady said that Endless Pasta Bowl does indeed ends on the 29th, which leads me to conclude that the server/waiter Tyler B lied to me about the Endless Pasta Bowl promotion being over. Given my experience in the retail industry, I find it difficult to believe that Tyler B misplaced the promotion's end date since it is the biggest promotion of the year that Oliver Garden has, which runs for August and September and the corporate office is pretty clear on communicating the details and terms of promotion to the general managers, which in turn instruct the restaurant's staff. At the end of the day I sent a complaint about this matter to Olive Garden company.

On the next day [Saturday] I decided to stop back at this Olive Garden #1567 on 696 Avenue of the Americas and see if I can get the Endless Pasta Bowl promo, since I had some business to do in the city. I got there at around 3:30PM and the place was packed. The woman on the reception desk told me that there is a 30 minutes of waiting time, to which I agreed and left to do the business that I had to do. When I returned back, the receptionist told me that she called my name and was not there, to which I acknowledged and she said to give her couple of minutes. I sat in the waiting area for about 5 minutes until they called "Alex", so I approached the reception desk and told that its me. Another guy and his female friend were also near the desk, and the receptionist told me that its that guy who is Alex, but that that is okay and that I should follow him, his friend and their host, which I did. I followed them to the back area, which was half empty compared to the fully packed front of the restaurant. I was seated behind a family of middle aged pop, mom and at least 1 of their toddler kids' [did not really paid attention to them]. The host told me that someone will be right back with me, so I sat there for 1-2 minutes and took a look at the menus. Then a server/waiter by the name of Robert R showed up, introduced himself and asked how could he help me. I asked him if the Endless Pasta Bowl promotion is still on, to which he replied yes, took out the Endless Pasta Bowl special laminated menu from his apron and asked if I would like to take a look at it, to which I said yes. The menu pretty much outlined the same terms that were listed on Olive Garden's website. I chose my combos for the Endless Pasta Bowl with the following items: 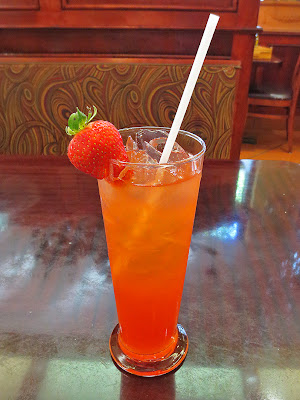 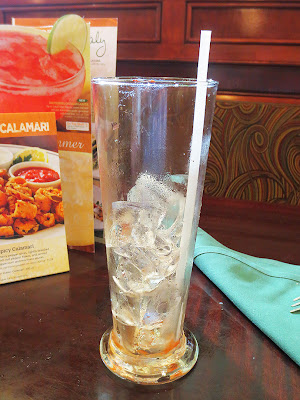 Robert R came back 2 or so minutes later with the Strawberry Passionfruit Limonata - "A sweet, refreshing mix of strawberry, passion fruit, lemonade and sparkling water" - that cost $3.79, which I began drinking right away. The beverage was a bit bitter due to lemon, and at first I thought that it was mixed with alcohol. The strawberry flavor made all the difference to it; a decent quality drink that was somewhat pleasant to drink, but I did like the Blackberry Blood Orange Tea from the previous visit over this one. Lots of ice was also left in the glass as with the Blackberry Blood Orange Tea. 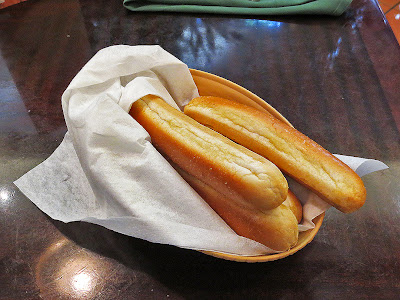 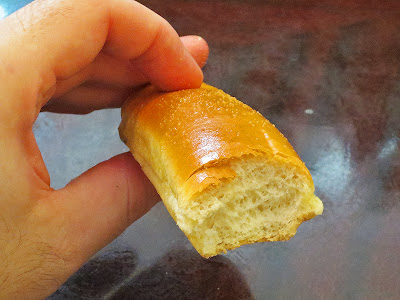 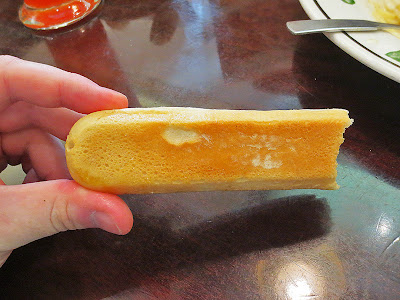 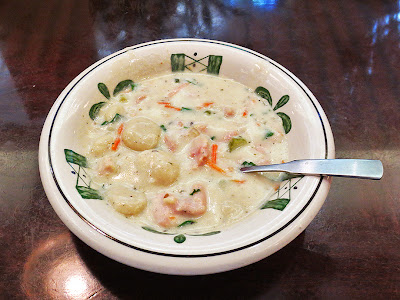 Chicken & Gnocchi soup - "A creamy soup made with roasted chicken, traditional Italian dumplings and spinach" - [included in the Endless Pasta Bowl promotion price of $9.99, but priced at $7.29 at a regular price, without sale/promotion ] was pretty good. A creamy soup with tender chicken pieces and chewy bite-sized gnocchies was very tasty, so I had to ask for another plate of this soup. The quality was like a good canned Progresso soup that was worth even its regular price. The only part that I did not liked that much about the soup is that the handle of the spoon was a bit short, and it felt like I was holding a slightly prolonged teaspoon. I definitely recommend this soup. 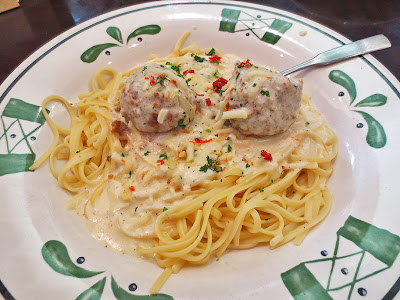 Pasta Bowl combo: Linguine with Asiago Garlic Alfredo sauce was included in the Endless Pasta Bowl promotion price of $9.99 [plus $2.99 for two meatballs]. The pasta combo [you have to select from around 6 or so types of pastas and another 6 or so sauces to go with it] came out pretty bland in terms of taste, so I had to salt and pepper it a bit to give it some more flavor to enjoy it. I think that I can make better pasta meal at home with the help of Pasta Sides pouches or the frozen Michelina's [Let Mama Feed You] trays than this Olive Garden pasta. The only good part about this pasta was the cheesy Alfredo sauce, which was not enough in my opinion. In the end, I did not finish all the pasta that was on the plate and has around 20% of it leftover, to which the sever/waiter Robert R suggested that he can pack it for me to go, the offer to which I declined. 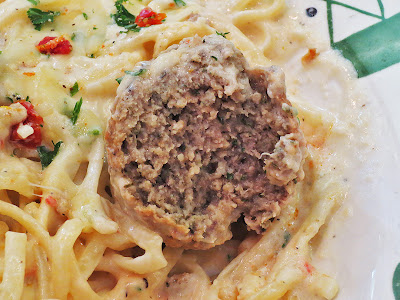 The meatballs themselves were pretty average, with weak taste to them, and were similar in taste to the Fast Fixin' brand of Italian style meatballs, just larger in size. I expected for $2.99 to be more than 2 meatballs, but they were large in size and at the end of the meal I was pretty stuffed and did not want any extra meatballs. I am also sure that these meatballs had soy filler in them, since they tasted and looked like the soy-filled meatballs. 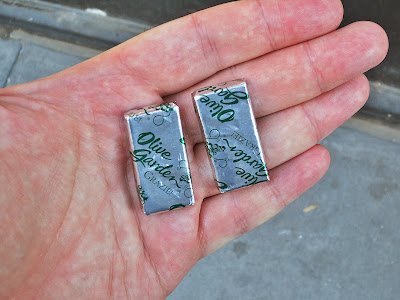 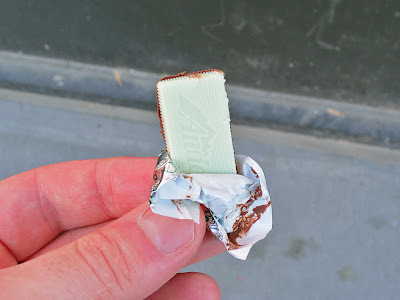 I asked for a check and Robert R brought the check valet along with 2 pieces of complimentary chocolate, which I did not eat since I was pretty full. The subtotal came out to $16.77, plus the sales tax of $1.49, with the suggested 18% gratuity of $3.02 to the total of $21.28, to which I paid $22.00. The server/waiter Robert R was straightforward with me, did not take a lot of time to serve the food and even asked me couple of times if I would like any extra grated cheese [which I declined since I am not a cheese fan, other than the melted mozzarella, provolone, American, swiss or nacho cheese sauce]. The table behind me with the family had someone with a birthday, so Robert R even sang the Happy Birthday song for them.

In conclusion I would like to say that the food [other than 2 drinks, soup and cheesy flat bread] was pretty mediocre. Generally I was satisfied with my experience but I would probably not go back again for the Endless Pasta Bowl promotion anytime soon again. Breadsticks, pasta and meatballs needs more improvements; more seasonings, to be precise. If you will go this Olive Garden location #1567 on 696 Avenue of the Americas then stay away from the server/waiter Tyler B, since there is possibility that he will lie to you as he did to me. Also call in advance to check if they will honor the promotion.
Posted by Dick Anus at 8:00 AM 2 comments: