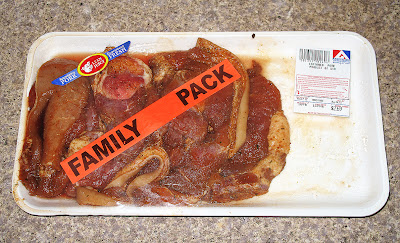 Just found these pork parts/chops in the local Associated food mart. They are already seasoned with all kinds of spices [no idea which ones, I'm not a chef] and I think that the main spice is paprika and you also have some greens bits that hint toward paprika. The price was pretty cheap [$1.59 per pound with 1.69 pounds per pack, to the total of $2.69] and I am already familiar with this type of seasoned meat because I bought seasoned wings before at Associated. 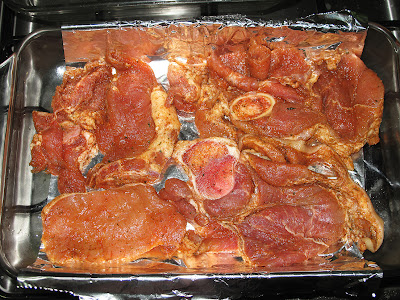 I sprayed some PAM underneath the pork and on top of it and put it in the over on medium heat. 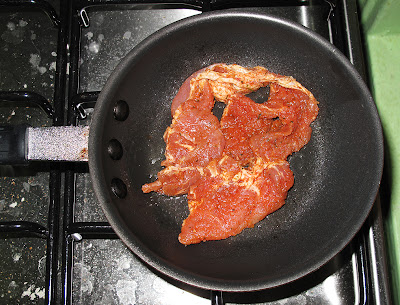 This piece did not fit inside the oven, so I decided to quickly fry it. 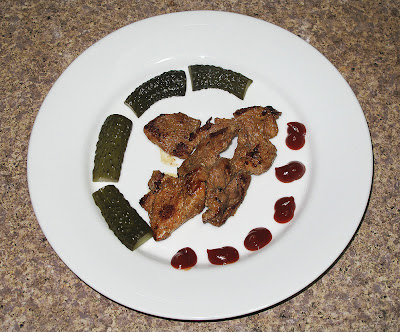 After about 7-8 minutes on medium heat on the frying pan, the pork was done. It came juicy and tender; just right. The pre-seasoned spices did their job and I was very pleased with the results. 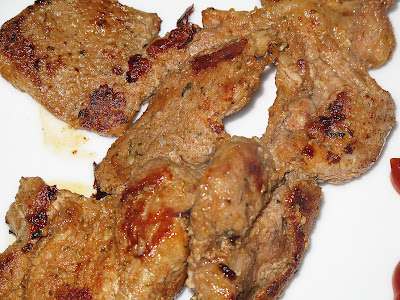 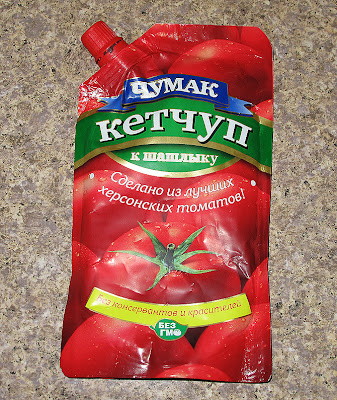 I used this ketchup as a condiment for the meat. It's a Ukrainian ketchup that they sell in the Russian stores in Brooklyn for around $1.00-$1.29 depending on location. The doypack holds 300 grams of ketchup that is formulated/flavored to along the Soviet-style shish kabob. I frequently use it with fried and roasted meats, and sometimes with/on the sandwiches. On the front it says that it is "made from the best Ukrainian tomatoes from Kherson". There is a good assortment in most Russian stores in Brooklyn of different brands of ketchup from the CIS producers, but I prefer this one [Chumak brand] because most of their products [they have all kinds of mayos, sauces and ketchups] that I have tried are tasty and of good quality, and they are priced reasonably. I also have a small pack (300 grams) of garlic ketchup (purple label) and a large pack (500 grams) of chili ketchup (orange label) [which I have yet to open and try]. They also had tomato-based sauce for the grilled meat which came in green-colored doypack, which I like a lot, but for the past 6 or so months I am having the trouble of finding it in the stores. 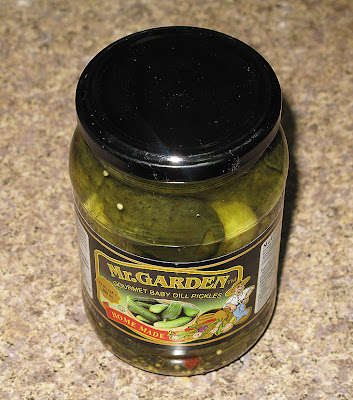 Baby dill pickles [cornish pickles] also go well with fried/grilled/roasted meat. These ones are not terribly sour like the bigger ones; these ones are sweet and sour, so they are versatile. I also got them at the local Russian food mart for $1.50 per 2x 17-ounce jars. It says "Home Made", but the fact is that they are made in China inside the pressure barrels. 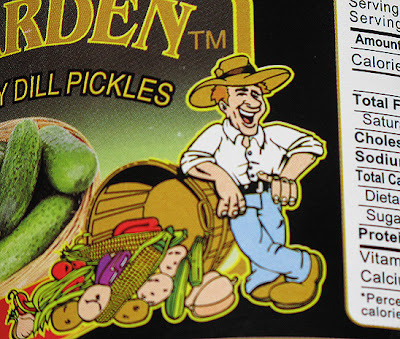 "Mr. Garden" mascot looks a lot like George Dubya to me. 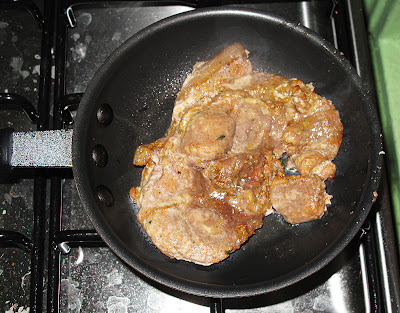 After I ate the 1st fried pork, I decided to open up the stove and tong-away the nearest piece of pork onto the fresh-oiled frying pan. Cooking time was slightly longer (around 10 or so minutes) than the previous fried pork piece, due to the thicker cut. 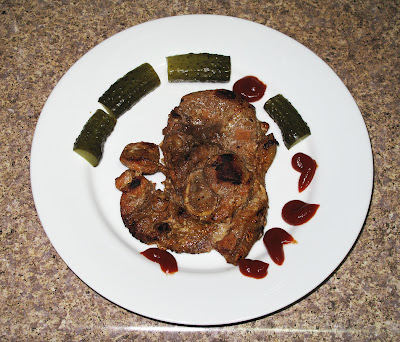 I'm not a chef, but I do like to put the condiments and extras on the plates. It looks and tastes better this way. 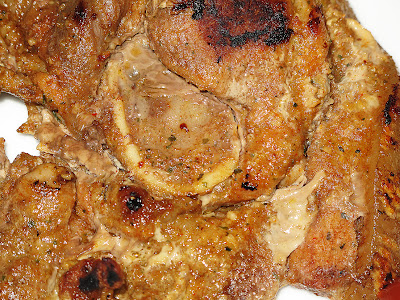 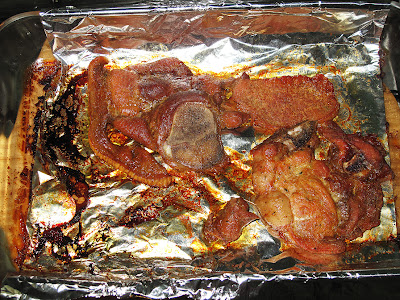 This is what came out of the oven after 1 hour or so. 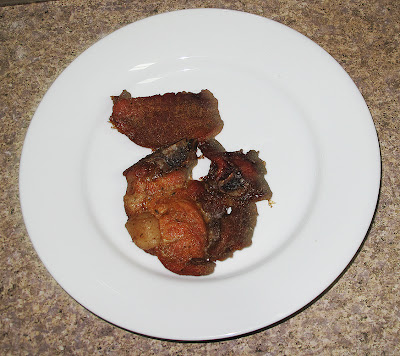 The pork from the oven came out dry; very dry in the lean areas like the topmost part. The areas with fat very a bit moister, but still dry. I prefer the frying pan method over the oven: its much tastier due to the juices and its faster [10 minutes vs 1 hour or so]. 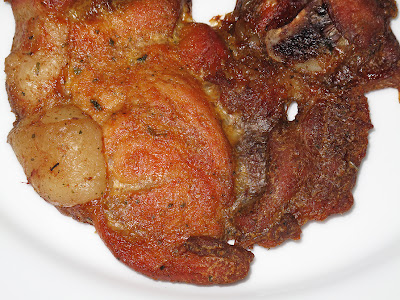 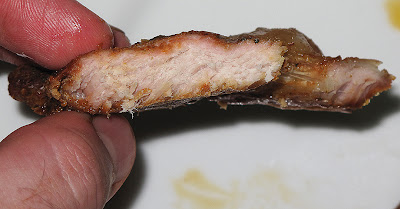 Section view inside the pork. 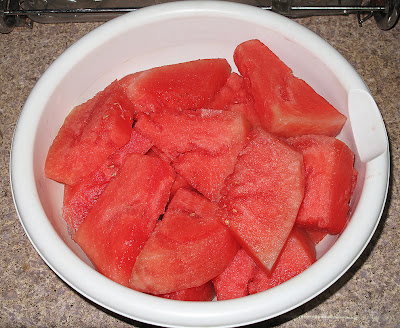 On the weekends I been at the Brooklyn Costco and they had huge watermelons for $0.49/pounds, so I grabbed one. After my pork meal, I took out couple of slices of it for dessert: the watermelon was ripe, crunchy, juice and just sweet enough. 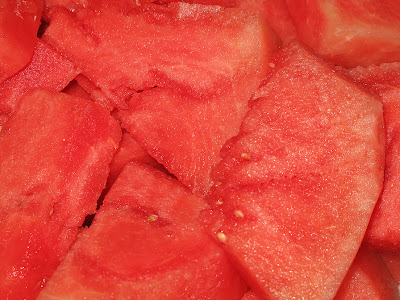