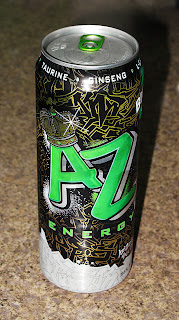 Just found this AriZona AZ Big  Boy energy drink at the local Associated mart couple of hours ago. I think that they just got the shipment/truck of it today, because a bunch of different cases of products were piled-up in the store, and I spotted a case (24-pk) of this stuff, and decided to puncture the plastic film and get a can to try out. After I took out the can from the case, I carefully turned the case around so it would not be visible that a can is missing from the fresh shipment. 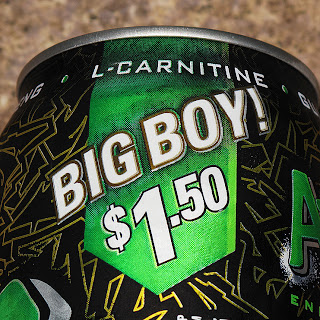 The [suggested and possibly standard]  price for this energy drink is $1.50 and it is boldly visible just under the rim of the lid, underneath the "Big Boy!". Right next to the case of these drinks was another AZ energy drink case of the Half & Half non-carbonated energy drink, which I also grabbed and it will be reviewed in another post. On the checkout both can did not scanned, because they yet had to be input in the register system, so the cashier manually keyed-in $0.99 per can while missing the suggested "Big Boy price" of $1.50. A dollar saved (on 2 cans) mean  that I can buy another cheapo energy drink or something else, like generic 20-ounce bottle of soda. 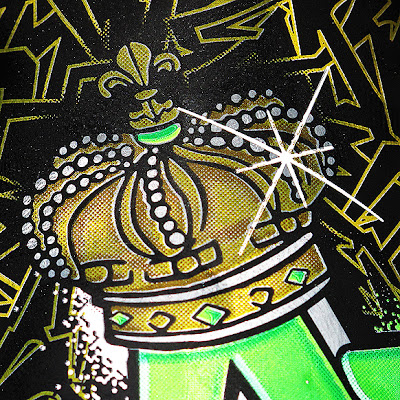 The first thing that I noticed after I spotted the case of cans, was this ghetto-inspired grafitisized crown. Personally I have no idea why it is there, but maybe AriZona company is trying to push this energy drink into bodegas and groceries around the ghettos and projects nationwide. Or maybe they just want the consumer to feel like the king while holding the jumbo can? 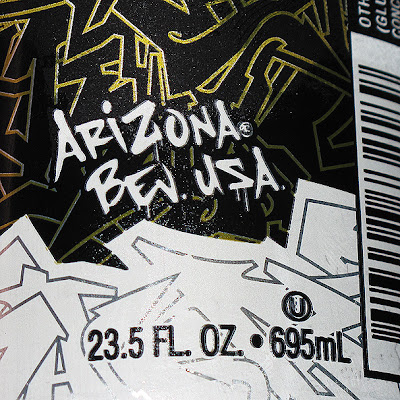 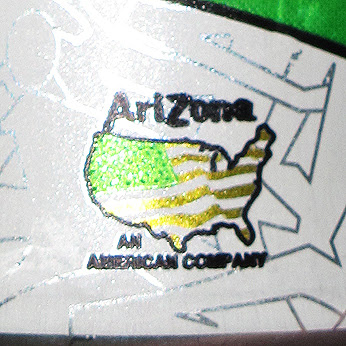 Made in USA is always good. [I really have nothing better to say about this photo; I just wanted to show/illustrate the irony to the photo below] 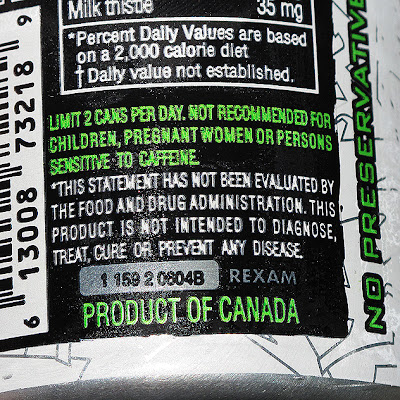 The warning on the back of the can suggests no more than 2 cans per day and that kids with pregnant women should stay clear from this energy drink. It also mentions "Product of Canada", which means that American company makes this product in Canada and then brings it back into the states. Maybe it's cheaper to churn out the energy drinks up north across the border due to the lower prices on the ingredients. 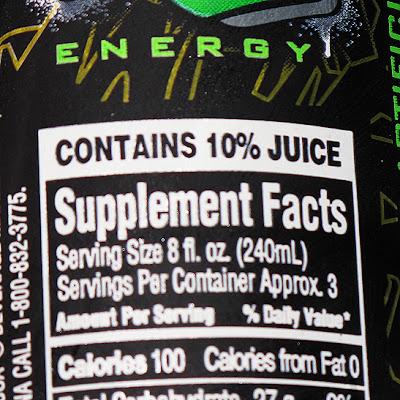 Apparently this energy drink contains 10% juice, and there are 3 servings [of 8 ounces per serving] inside the jumbo can. You also get 100 calories per serving, to the total of 300 per can. 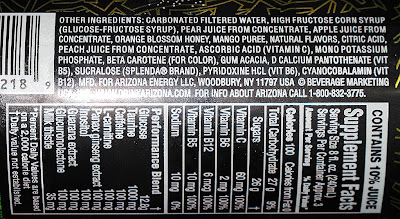 Here you have the list of included ingredients, other than your standard energy drink energy mix of ingredients (taurine, ginseng, l-carnitine, guarana and B-vitamins). 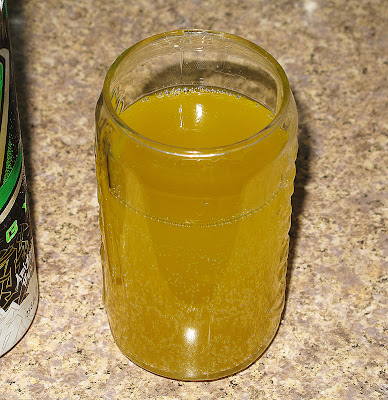 Before I cracked-open the tab, I was really hoping for Monster clone to be inside the can due to the green lettering, but as soon I applied my nose to the lid [to get the whiff], I became a bit disappointed. Another thing that disappointed me is the fact that this energy drink has existed on the market for at least 2 years [I googled it and found that someone has uploaded a video review of it on YouTube two years ago] and that I have only spotted it today for the first time, because I was really hoping to be the 1st one to break the news. The color of the drink is murky neonish-yellow and it smells kinda citrusy and tastes a bit citrusy at first, but when I tried to break down the flavor a bit deeper, I found that the faux citrus flavor is just the mix of carbonation, bitter energy ingredients and juice (mostly pear). The mix of the mentioned ingredients was not pleasant at all at first; I drank approximately from 1/4 to 1/3 of the can and then put it into the fridge for around 5 or so hours. Now I took it out from the fridge and carbonation [which apparently aided with the bitter taste] has receded, which resulted in much more pleasant, sweeter and almost carbonation-free energy juice. The pear juice stands out [slightly] from the apple juice [nonexistent, in terms of taste] and the smooth aftertaste-free sweetness is also a plus here. In terms of energy kick, this drink is pretty solid; since I drank the whole can in 2 intervals, I really felt the initial kick and the following one [time difference is just over 5 hours]. Right now it is almost 6AM and I feel pretty charged. I can't really see myself buying this energy drink in the future, and I really wish that AriZona company would take out the carbonation, because for this product, carbonation does more harm than good in terms of taste. I rate this energy drink at 3.3/5.0 with a value rating of 4.1/5.0.
Posted by Dick Anus at 2:57 AM