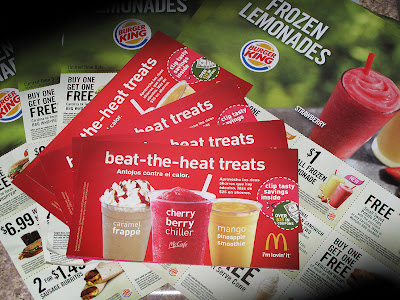 This Thursday the weekly circulars came in to my building. I check them every Thursday for useful coupons, and this time there were bunch of them; from McDonald's and Burger King. Most of the time the coupons that I get in the circular are useless to me, this is because those coupons are for the items that are either not available in my area or for the things that do not apply to me; like pet food, medical products and other crap. 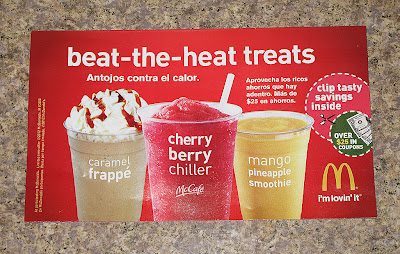 So this is the current McDonald's promotional coupon booklet. I was able to get 5 of these booklets, before I went back to building's hall to get some more circulars, only to find out that the super has disposed of them all. 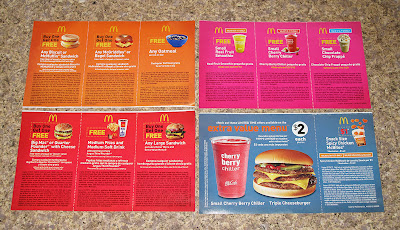 Inside the booklet are all these coupons. 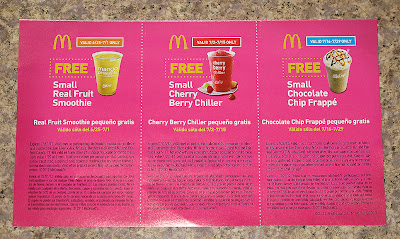 These coupons are for drinks, but they all kind of follow an order, so you can't use them whenever you want to. Current one is the leftmost, the yellow one. Next week the Cherry Berry Chiller starts. 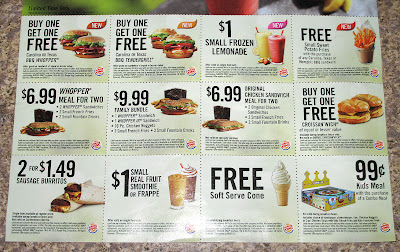 Burger Kings also had it's coupon sheet, and this is how it looks like. Only real free item here is Soft Serve Cone. 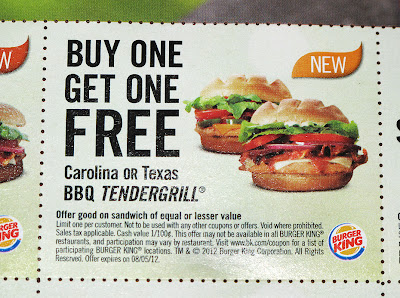 This is the 1st coupons that I planned to use. 2 sandwiches for the price of 1 is a decent deal. 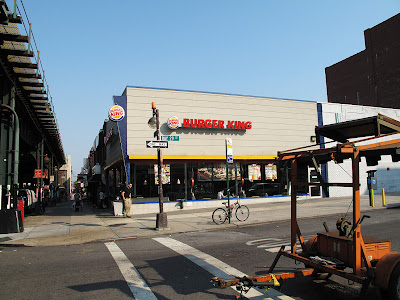 So I went to this place. 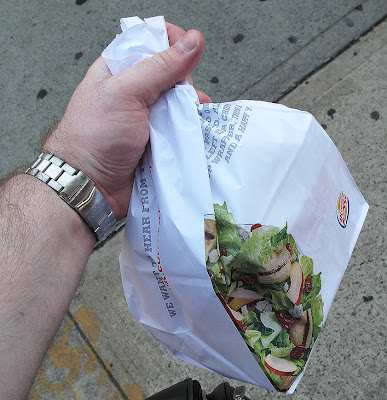 And got 2 of these Tendergrill sandwiches: one was Texas and other was Carolina. 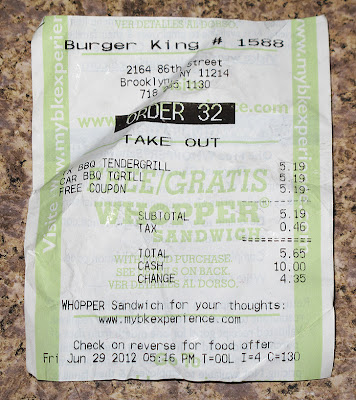 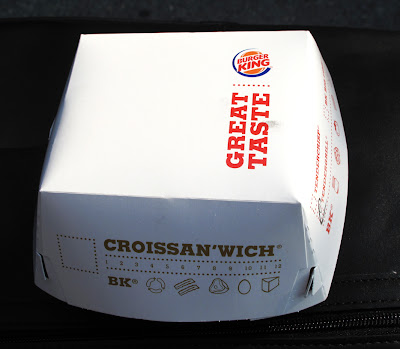 Each sandwich comes in a such box, pretty standard but I had no idea which sandwich was in it. 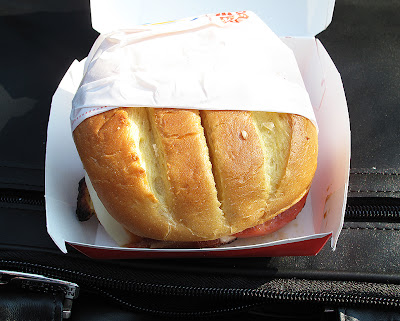 This bun is different from the burger bun, it is more firmer, sweeter and I think that the eggs were added in the dough. 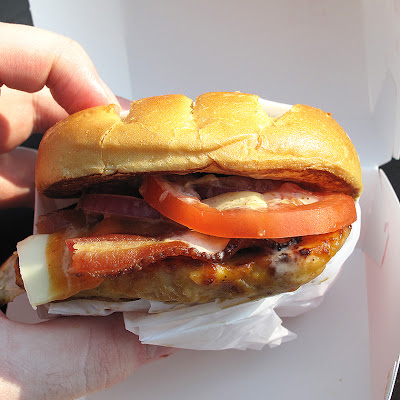 This sandwich is the Carolina Tendergrill. What I liked about it was the white cheese (not sure which one, maybe most likely Swiss cheese), bacon, quality sweet onion and the sauce. The sauce was decent and complimented the rest ingredients pretty well, but other than this, the sauce was nothing special; just tangy. The chicken breast was okay with seared-in glaze on the outside, which goes well with the rest of the ingredients, but by itself (just the chicken breast) it would be too dry; sauce, onions and tomatoes do a good job by mixing together in the mouth to create the "Carolina taste" (whatever that suppose to mean). Overall this is a solid 4.0/5.0 sandwich that I enjoyed eating, and $2.60 coupon-factored price is pretty decent value. 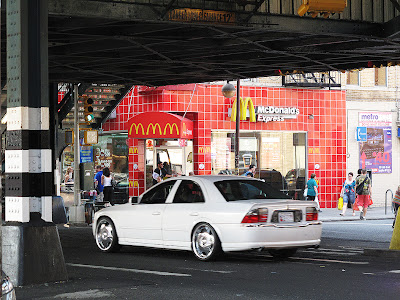 Next stop was this McDonald's "Express" that was about 3 block away from the Burger King. 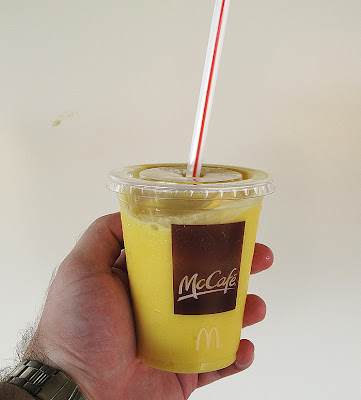 Here I got this small mango smoothie, by using the leftmost magenta coupon. In McDonald's they have this special blender machine with touchscreen, where the McPerson has to press on the kind of drink and the size of it, and the machine does the rest within 15 seconds or so period. First it squirts out from the side the yellow liquid into the blending pitcher, and then the thicker yellow liquid drops from the top of the pitcher, and the concoction blends together. I think that the 2nd yellow liquid already had ice it. It was difficult to see the process from the angle at which I was looking at the machine. The smoothie itself was pretty good for McDonald's; certainly not Jamba Juice quality, but for McD's prices it was very satisfying, especially when I paid nothing for it. I drank it in the train, and the small cup lasted around 10 minutes. I rate this mango smoothie 4.0 out of 5.0. Decent value for a small size cup. 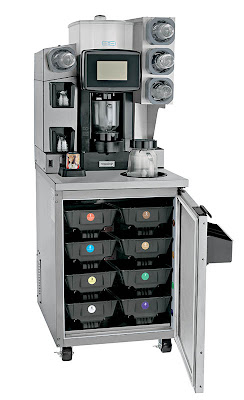 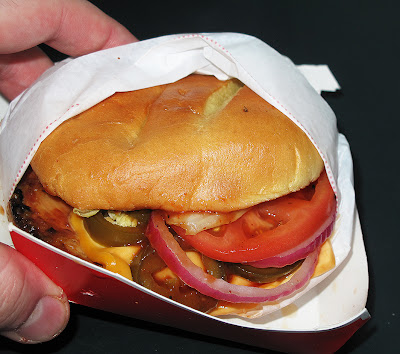 This second sandwich is the Texas Tendergrill. I ate it in the Bryant Park, and it was over 1 hours since I bought it, so it was not that fresh and juicy. Instead of bacon, sauce and white cheese, you get the jalapeno peppers, lettuce and standard burger cheese (yellow American). Not only was this sandwich dry but it was also spicy, and I had no beverages on hand so I consumed around 70% of it and threw out the rest. Maybe if it was hot off the grill it would've been better, but in my circumstance, I was not too much please with it; dry meat with spicy peppers, topped-off with cold and stale buns. My verdict 2.0/5.0. 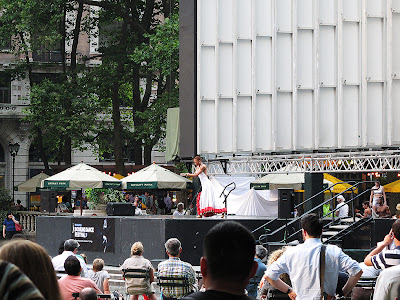 They also had some kind of performance event in the park, for which I did not care much. 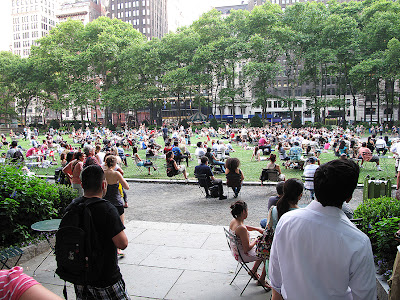 But this crowd seemed to be digging it. 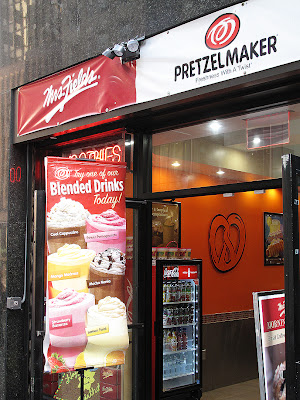 Lots of chain QSR spots in the city peddle all kinds of smoothies and blends. This Mrs. Fields joint has the following lineup to choose from. 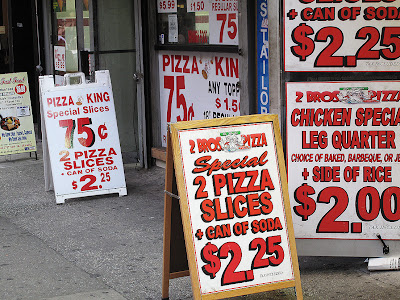 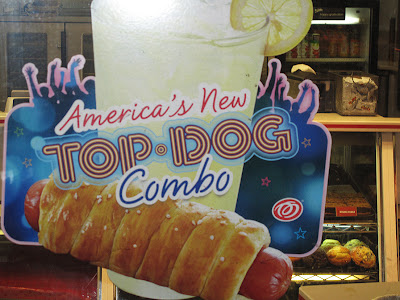 Another Mrs. Fields spot (34th Street) has this promotion combo of pretzel dog and somekind of chilled lemonade or something along the line.
Posted by Dick Anus at 9:18 PM