A week or so ago I was in the city and walked past by a Popeyes joint (14th Street) and I noticed the promotional poster on the window that advertised the Zatarain's Butterfly Shrimp, and as always, I was interested to try out this new promo item. I was in a rush so I did not enter, but made a mental note to stop by and try it out. I am not an expert on Zatarain's, nor have I ever tried its products, but I know that they make rice or something like that, kind of what Uncle Ben's makes. 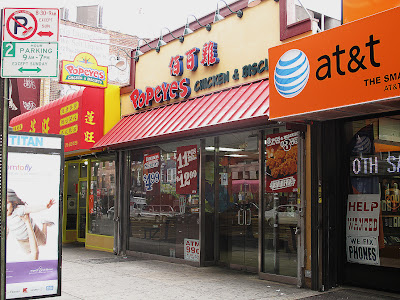 Yesterday I was in the 86th Street area, going to the Starbucks joint for the free beverage promotion that they had, and right across the street (diagonally from Starbucks) I spotted this Popeyes joint. What attracted me to it was the Asian Popeyes text on the front of the building, so I decided to step right in and order the promo shrimps. The price is $4.99 (plus tax) for an order of 8 pieces of shrimp, but while waiting in line, I scoped-out a promo poster that suggested the meal of these same shrimps plus fries, biscuit and a drink, for a price of $6.49 (plus tax). The time was around 3:30PM and I have not eaten anything that day so far, even though I woke up at around 2:00PM, so this combo meal was a sounded like a good buy for me. I figured that it was $0.50 or so extra per additional item, but what really sealed my decision was the inclusion of the biscuit, which I like so much: the Popeyes biscuit. Drink was also a-must, since deep-fried items almost always need a fluid aggregate in order to aid down the goodness. I think it was last year that Popeyes introduced their [Cane] Sweeeet Tea, but the price for a gallon of it was $4.00-$5.00; a bit too high than that of what I was willing to pay for it. But in this joint I noticed that they have 2 self-serve urns with this proprietary sweet tea: regular and peach-flavored. Decision was made in favor of the combo meal, and I placed my order with the cashier. 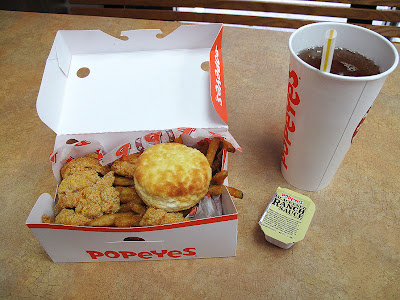 So this is pretty much the combo meal: 8 shrimps (as per menu) but I actually had 9 and 1/2 (tail, smaller part) in the box, complimentary dollop-pack of Blackened Ranch Sauce, Popeyes fries, biscuit and a drink of choice (I chose Sweeeet Tea, that's how they call it here; with 4 E's). 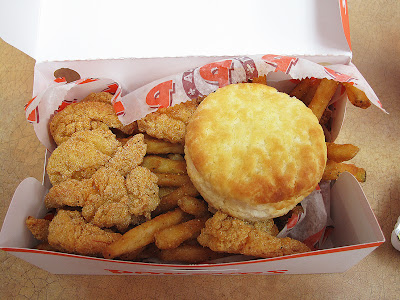 The shrimps were nothing special to rave about, just a decent-sized shrimps for a fast food chain joint with hard-breaded coating. The negative part was that the breaded coating was dry, and the use of the sauce plus the drink was applied here generously. The coating separated from the shrimps were easily, and  it (coating) was crumbling down the paper box, which required me to use the napkins several times during the consumption of the meal. The biscuit was a disappointment here: at room-temprature with no signature buttery-taste that Popeyes biscuits are famous for. The fries were really good, but a tad-bit salty, but maybe that's even a plus; I have no complaints for the fries. Overall the combo meal tasty and I did not regret it. I would probably buy it again but as far as I know it these shrimps are for limited time only, so I guess by the end of the month they will be gone at Popeyes. I rate this combo meal at 4.0/5.0 with a value rating of 4.2/5.0. 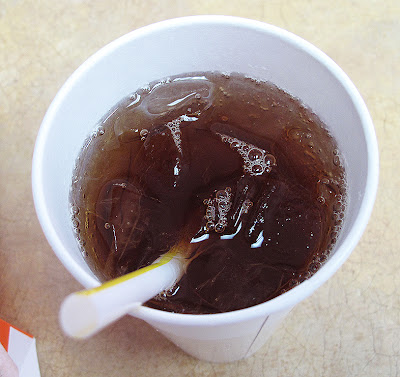 Louisianna Sweeet Tea was pretty good: not as good as McDonald's Sweet Tea, but much better than Dunkin Donuts' Sweet Tea. I chose the regular version instead of the Peach-flavored one, because I thought that standard sweet tea would taste better with shrimp and fries. 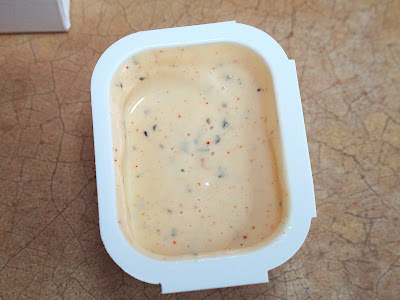 The sauce is nothing special and I can't say that anything stood out about it. It's just a sauce that compliments the shrimp and it had red and green ingredient dots, or whatever the stuff is, I did not care about it. The shrimps by themselves were a tad dry externally, so I guess that pretty much any sauce aided the consumption of the shrimps. I just noticed that the promotional graphic on the top mentions that the sauce is "Lemon Garlic Sauce", but this dollop-pack had "Blackened Ranch Sauce" name on the cover, maybe they screwed-up my order? 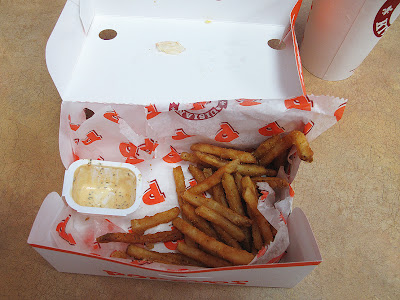 At the end I was pretty much stuffed and felt like I should not eat any more, so these are the leftovers that I threw out: pretty much the fries. But I did drink the remains of the beverage, and around 15 minutes later got a free soft serve ice cream cone over at the Burger King. 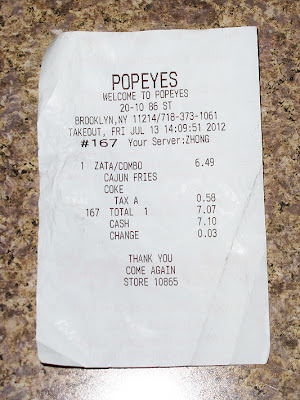 So the total came out to $7.07 with tax, which is not so bad for 9 and 1/9 shrimps, fries, biscuit and drink. A decent price I'd say. No regrets about forking such cash for it.
Posted by Dick Anus at 5:34 AM