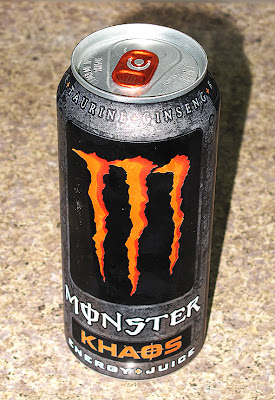 Monster Khaos (Monster Orange) is another variation of Monster energy drink, that combines Monster with juice. It is in the same category that Monster M-80; the Energy + Juice category. I got this can at the K-Mart for $1.99 plus tax and bottle deposit, as well as bunch of other energy drinks. The can as you can see is pretty much like Monster M-80 but with the orange color variation. 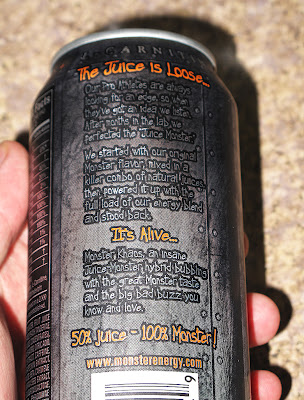 The story of Monster Khaos. I did not read it because I do not care about this marketing fluff, but I kinda skipped and found that they mention "Pro Athletes", and on the net if you google "Monster Khaos", you will see bunch of sports cars with Monster Khaos themed graphics, so this is some kind of marketing ploy that promotes "Pro Energy" or something like that. 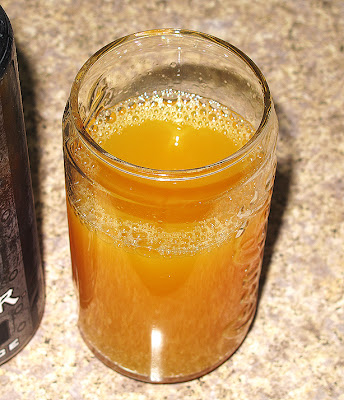 As soon as I popped the lid open, I could smell the orange-citrusy scent and when I took the 1st sip, I was 100% convinced that it was an orange juice blended-in. And indeed, it tasted like orange juice. I drank the whole can without enjoying it, since in my point-of-view, Monster + Orange Juice don't mix well as far as the taste goes. Half an hour so later, after drinking Monster Khaos, I still have this nasty lingering aftertaste in my mouth like you have with the diet drinks that use the artificial sweetener, that makes you want to drink something sweet to get rid of the aftertaste. I had high hopes for this energy drink because a lot of people raved about it online and some even claimed that it is out of production. Personally I did not enjoyed or liked Monster Khaos and so far this is my least favorite Monster, and I would not buy it ever again. Maybe its just me, but I just don't see how orange juice and Monster energy drink mix together to form a "Pro-Grade" concoction. I rate this Monster Khaos at 2.7/5.0 and the value rating is $4.3/5.0. If you are a big fan of orange drink then you most likely will like Monster Khaos as opposed to me. I also got a can of Monster Assault (Monster Red) energy drink, which will I will review in the future. And Monster Red's story section mentions something with "Viva La Revolution!", so make your own presumptions about that!
Posted by Dick Anus at 9:00 PM